Hey, have any questions you'd like to see posted?  Send them along for others to try!

PS, I'm on vacation this week, so the puzzle posting may be a little erratic.
Posted by Unknown at 7:36 AM 2 comments:

Do you know any other Christmas Letter Equations?  Post them in the comments below!

How Many Societies Just Give Tractors Away?

There are 3 societies A,B,C having some tractors each.

What is the original number of tractors each had in the beginning?

Submitted by Guess the Logo.
Posted by Unknown at 8:11 AM 5 comments:

I'm not sure I know the answers to these. Can you help me figure them out?

Fill in the blanks:

There are two possible solutions. Try to find out both of them.
Posted by Unknown at 12:08 PM 3 comments:

Each player throws the dice in turn. Tim wins when the two top faces are the same color. Al wins when the colors are different. Their chances at winning are even.

The first die has 5 red faces and 1 blue face. How many red and how many blue are there on the second die?
Posted by Unknown at 9:49 AM 6 comments:

Which of the following anagrams is not a US city?

Email ThisBlogThis!Share to TwitterShare to FacebookShare to Pinterest
Labels: anagrams

In this year's Senior Class play, Ellis Island Idylls, a comedy celebrating America's ethnic heritage, Mike and four other boys play the five major male roles. Ironically, no one is playing the role for which he auditioned but instead is cast in one of the other four parts. Given this information and the clues, can you determine each actor's first and last name (one last name is Curtis), the part for which he auditioned, and the role he is playing in the production?

1. No two actors auditioned for and play the same two roles.
2. Tom is not the one playing Ivan.
3. Four of the actors - Ray, Evans, the one who tried out for Padraic, and the one portraying Ivan - had been in the Junior Class play.
4. The boy who auditioned for the role of Johann - who is not Pete Adams - is not playing Olaf in the production.
5. In one scene, Decker and the one who auditioned as Giorgio woo the same girl.
6. Ray did not try out as Ivan and did not win the Padraic role.
7. The boy who auditioned as Padraic - who is not Tom - is not the one playing Johann.
8. Steve and the Decker boy are also on the stage construction crew.
9. The actor playing Padraic auditioned as Olaf; he is not Tom.
10. The Block youth got the part for which Pete auditioned.
Posted by Unknown at 11:49 AM 2 comments:

Are You Willing to Pay the Fine

Last Tuesday, five students majoring in literature - Judy, Lisa, Mary, Mike, and Phil - each received a notice from the university library for an overdue book (one book was by James Joyce). Can you determine each student's full name and the author of his or her overdue book?

Another Question About Alice

Another question submitted by Rich:

Alice is an ant that lives on a stick. Alice is no different from other ants : All ants walk at a speed of 1 metre per minute, are perpetually walking, and upon reaching the end of sticks or meeting other ants they turn and walk back the other way (they do not fall off nor can pass one another). We now place a finite number of ants on Alice's stick (again with Alice in the middle) and start them walking. We do not know how they are oriented. Could there be an ant in the middle of the stick after a minute? If so when would this ant be Alice?
Posted by Unknown at 9:19 AM 3 comments:

The following question was submitted by Rich (let me know if you want a link to somewhere?).


The following image contains the answer as it was sent to me by Rich. I can't get the formulae to show in the comment section, so this is my best solution. So consider this a spoiler alert! 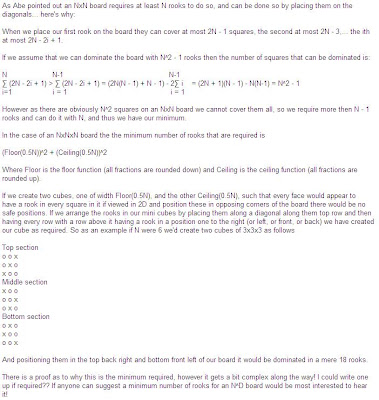 I've asked different versions of this question in the past, but I always find it interesting. How about you?

You have a glass of water sitting on a perfectly balanced scale. You put your finger into the glass and into the water. Your finger does not touch the glass, it only is submerged in the water. It makes the water go higher up the sides of the glass but it does not overflow.

What happens to the scale?
Posted by Unknown at 7:58 AM 10 comments:

Investigators break into an apartment and find the remains of 3 dead bodies on the floor in a pool of water. The only living occupant of the apartment was a cat in the corner.

The investigators quickly leave, never write up a report, investigate the dead bodies, or even send for an ambulance to pick them up.

Do Not Pass This One

A woman pushing her car stopped outside a hotel and immediately went bankrupt. Explain.
Posted by Unknown at 8:40 AM 4 comments:

Hogan and Snead are professional golfers and long-time rivals. One day during a game, they had each scored 30 when Hogan hit a bad shot. Snead immediately added 10 to his own score. Snead then hit a good shot and won the game. Why?
Posted by Unknown at 9:40 AM 2 comments:

Using the scale twice, locate the ball that is heavier.
Posted by Unknown at 7:45 AM 4 comments: